The western lowland gorilla is an exclusively vegetarian gorilla that lives in family groups led by a dominant male, that can be distinguished by its silver whitish back. The size of the group varies between two to twenty animals, and is formed by at least the dominant male, several females and infants. As in humans, they do not have a determined reproductive season, and females give birth to a single infant, after almost nine months of gestation.

Recent studies about its DNA show that they share 97.7% of the genes with humans. 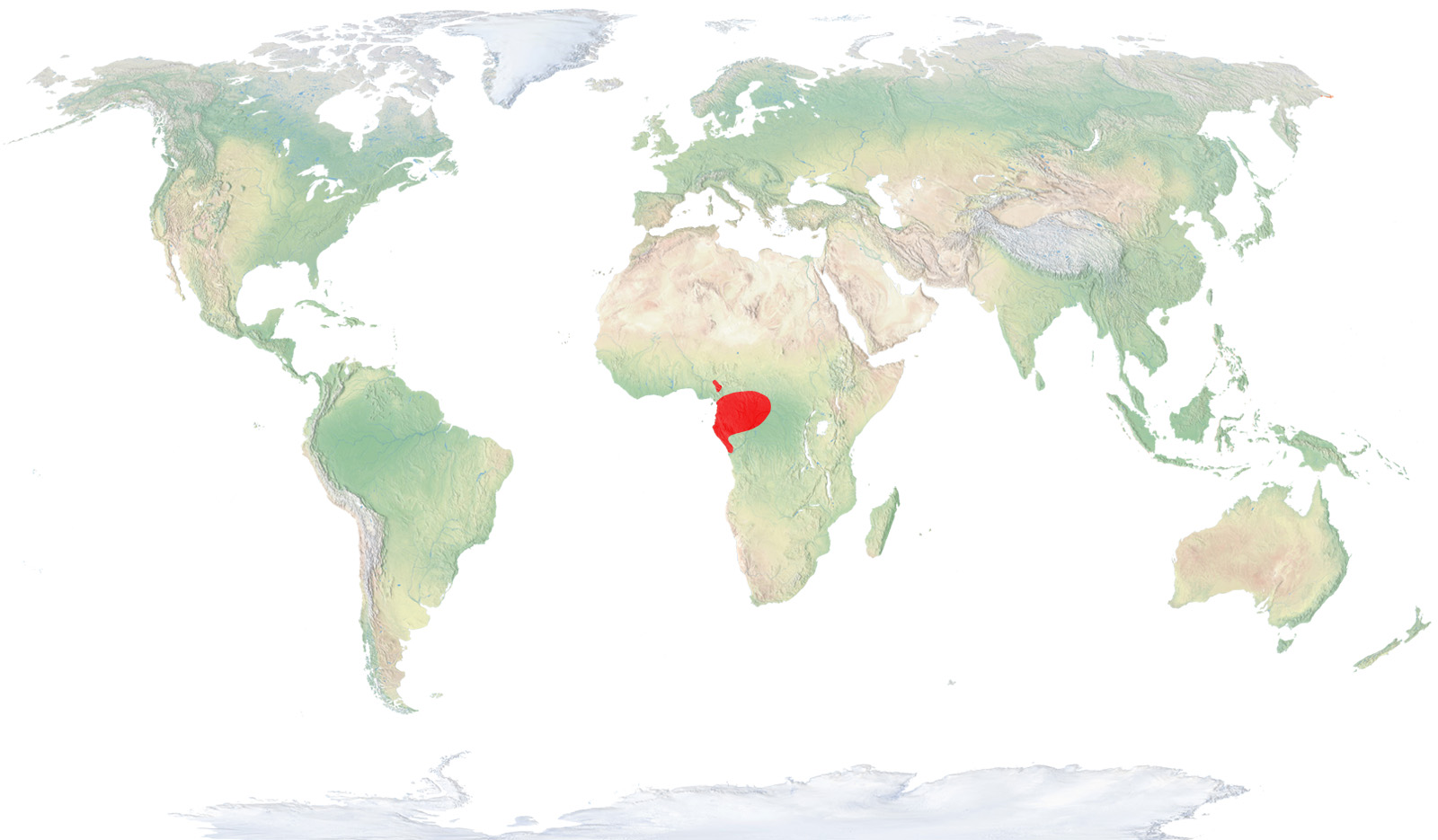 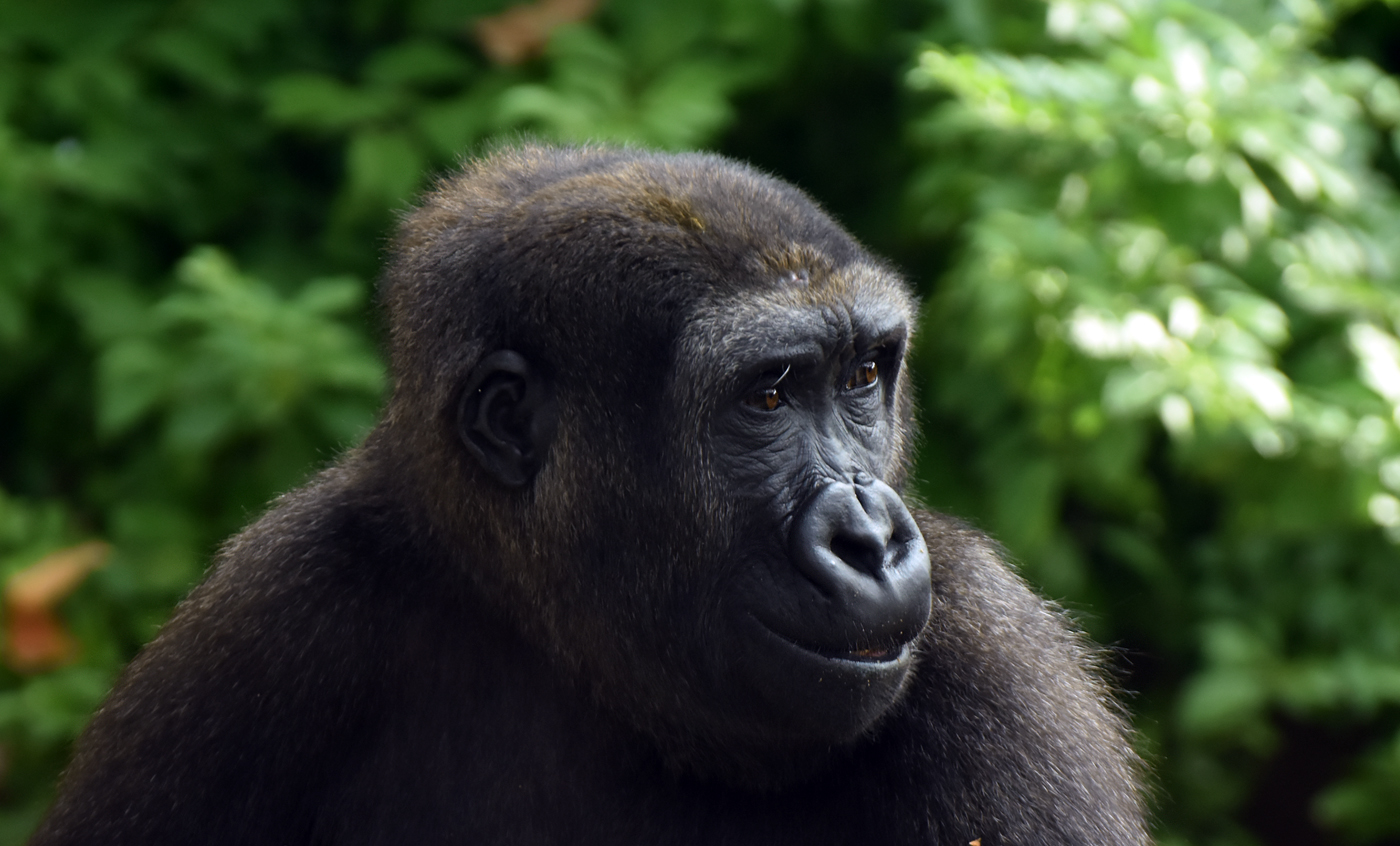 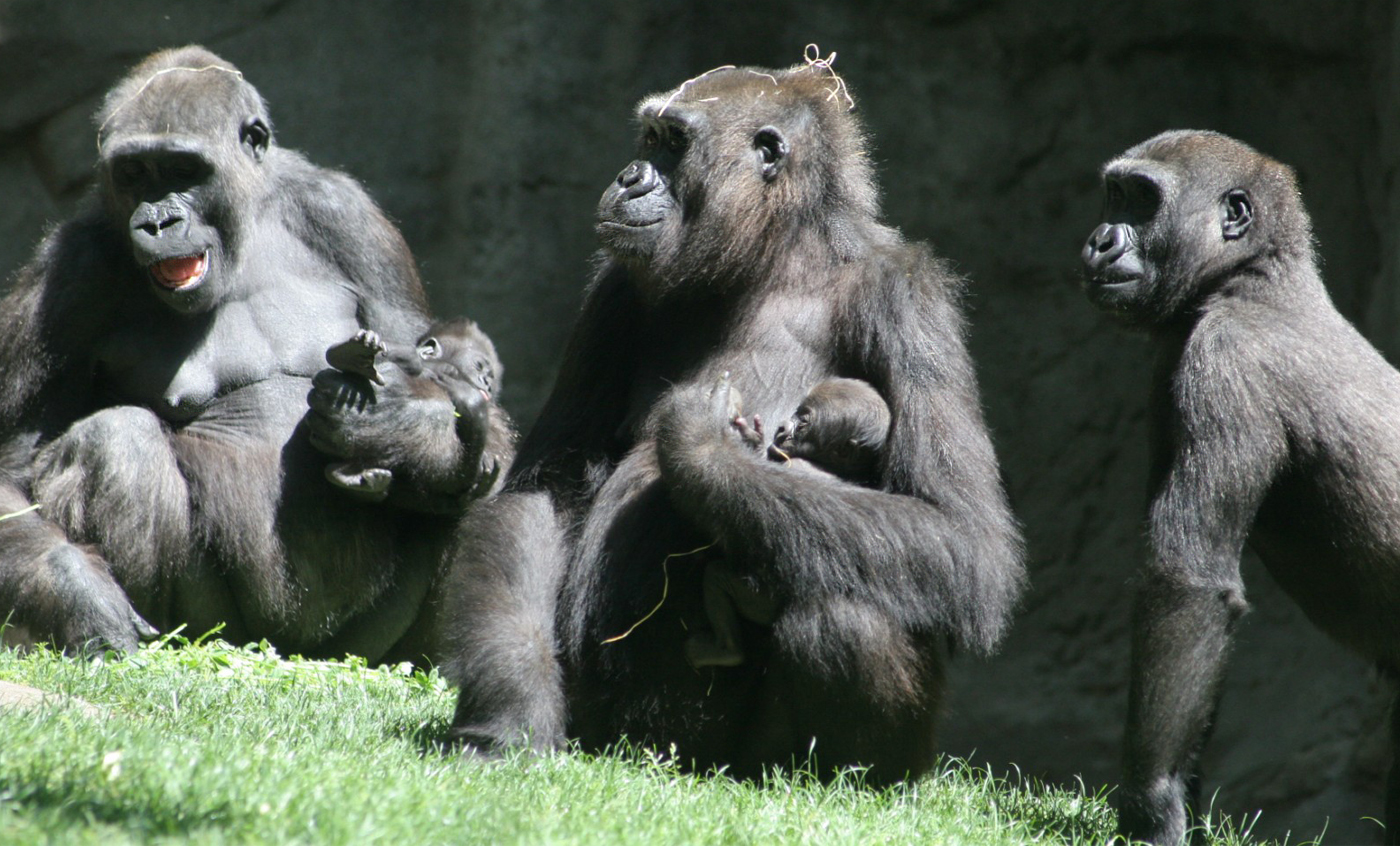 Gorillas are the largest primates, males are usually 1.65 to 1.75 m tall and weigh 145 to 190 kg, and in captivity some are capable of reaching weights of up to 250 kg.  Females weigh half as much as males. Their front limbs are longer than their rear ones and are also used as a support for walking, as they usually walk on all fours.

Adult males have a characteristic sagittal crest and grey hair on the back with a silver hue, which is why they are known as “silverbacks”.

Gorillas are herbivores that spend most of the day foraging and they never fully exhaust a feeding point. An adult male can eat up to 30 kg of plants, mainly leaves, fruits and tender sprouts. Occasionally they can feed on insects, though it only represents 1% or 2% of their diet.

Gestation lasts for eight and a half months and a single infant is born each time, with a weight of 2 kg.  Infants are looked after until their 4th or 5th year, with long intervals between births, which explains why gorilla populations grow so slowly and why they are so vulnerable to poaching. Young males often abandon the group upon reaching adulthood. Females move to another group before reproduction, that begins when they are 8-9 years old.

Despite the bad reputation they got from the fantasy tales of the first European explorers of Africa and certain films such as King Kong, field studies carried out by scientists like George Schaller, Dian Fossey, Jordi Sabater i Pi or Marga Bermejo, show that gorillas are shy and peaceful animals, able to accept humans in their environment if these respect and do not interfere with their habits and daily activities.

Gorillas live in stable groups formed by five to ten individuals, with a dominant male that leads and protects the females and the infants. As infants grow, they abandon their paternal group to form their own, in case of males, or to join other groups, in case of females.

It is a peaceful animal and in places where food is abundant, groups of gorillas can gather in the same area without serious conflict.

As in the rest of Pongids, due to its genetic resemblance with humans, gorillas have been object of great interest, mostly to study its behaviour, either in captivity or in the wild.

In 1970, gorillas were classified under a single species, with three subspecies:

Since 2003, gorillas are classified in two species, which in turn have two subspecies each, as stated in the Red List of Endangered Species of the IUCN:

Its hunting or trade are totally forbidden and its greater threats are the destruction of rainforests for agricultural purposes, poaching and, lately, the effects of the Ebola virus outbreak, which is causing great mortality in the Democratic Republic of the Congo and in Gabon, an area that comprised 80% of all the gorillas living in the wild, and where a loss of 56% has been estimated for the last years. The list of causes of the reduction of gorilla populations in the wild also includes armed conflicts, which are frequent in the area.

It is estimated that the total amount of gorillas in the wild does not exceed 100.000 specimens by much, and the UNEP, the United Nations Environment Programme, has included gorillas in the red list of endangered species for the next thirty years, while pointing human activities as the main threat of the species. According to the UNEP, on 2030 less than 10% of the habitat of great apes in Africa (gorillas, chimpanzees and bonobos) will remain unaffected by human impact.

Laws against hunting and capturing gorillas have been passed in all the countries with populations in it, but their enforcement proves to be very difficult. In order to prevent their extinction, in situ conservation programmes are being carried out, through the creation of sanctuaries, reserves and national parks.

In Europe, an EEP of the gorilla specimens in the zoos is being carried out, in order to maintain a demographically sustainable population with enough genetic variability that allows to keep a reserve in case of any future difficulty, in which the Zoo of Barcelona takes an active part. 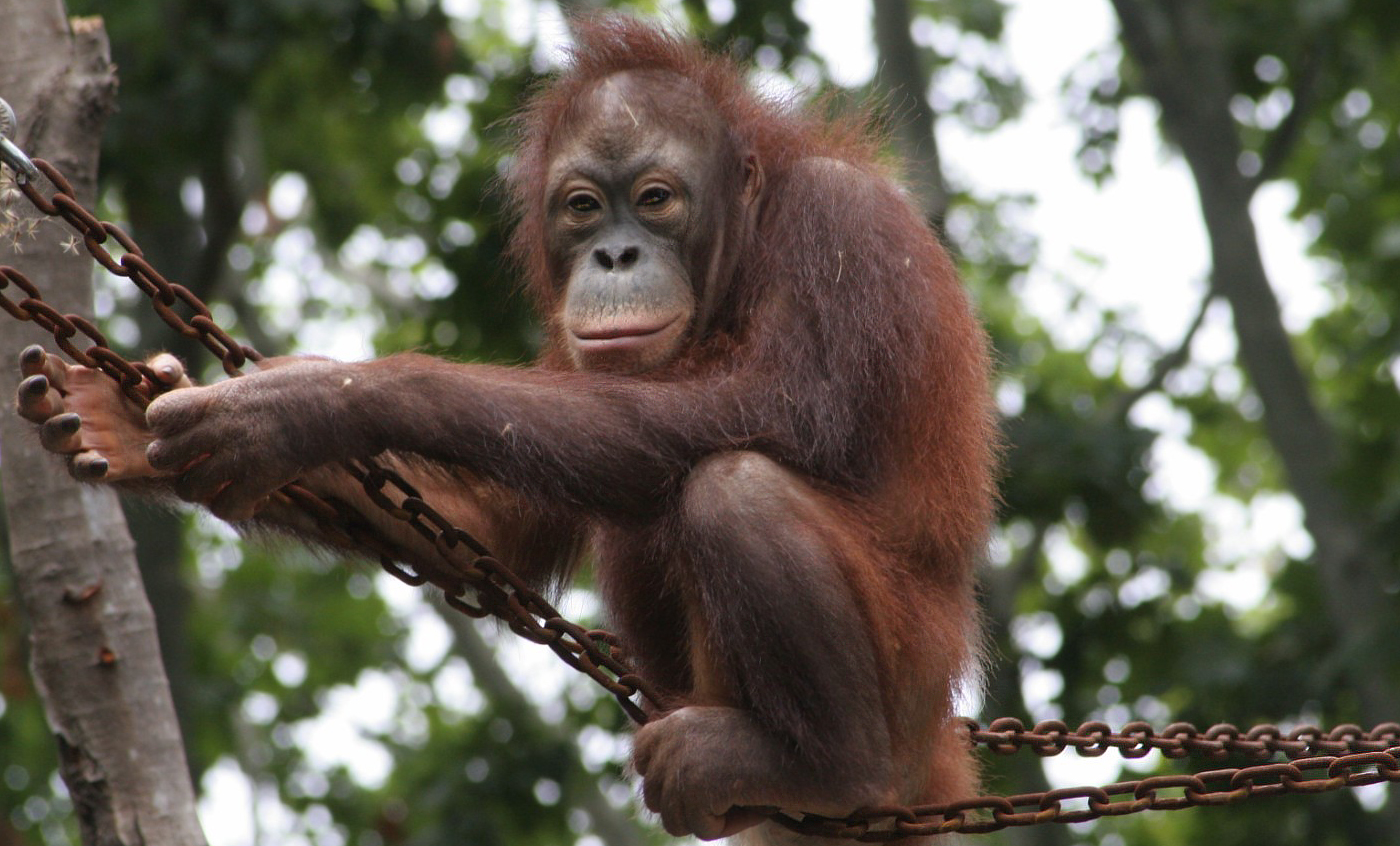 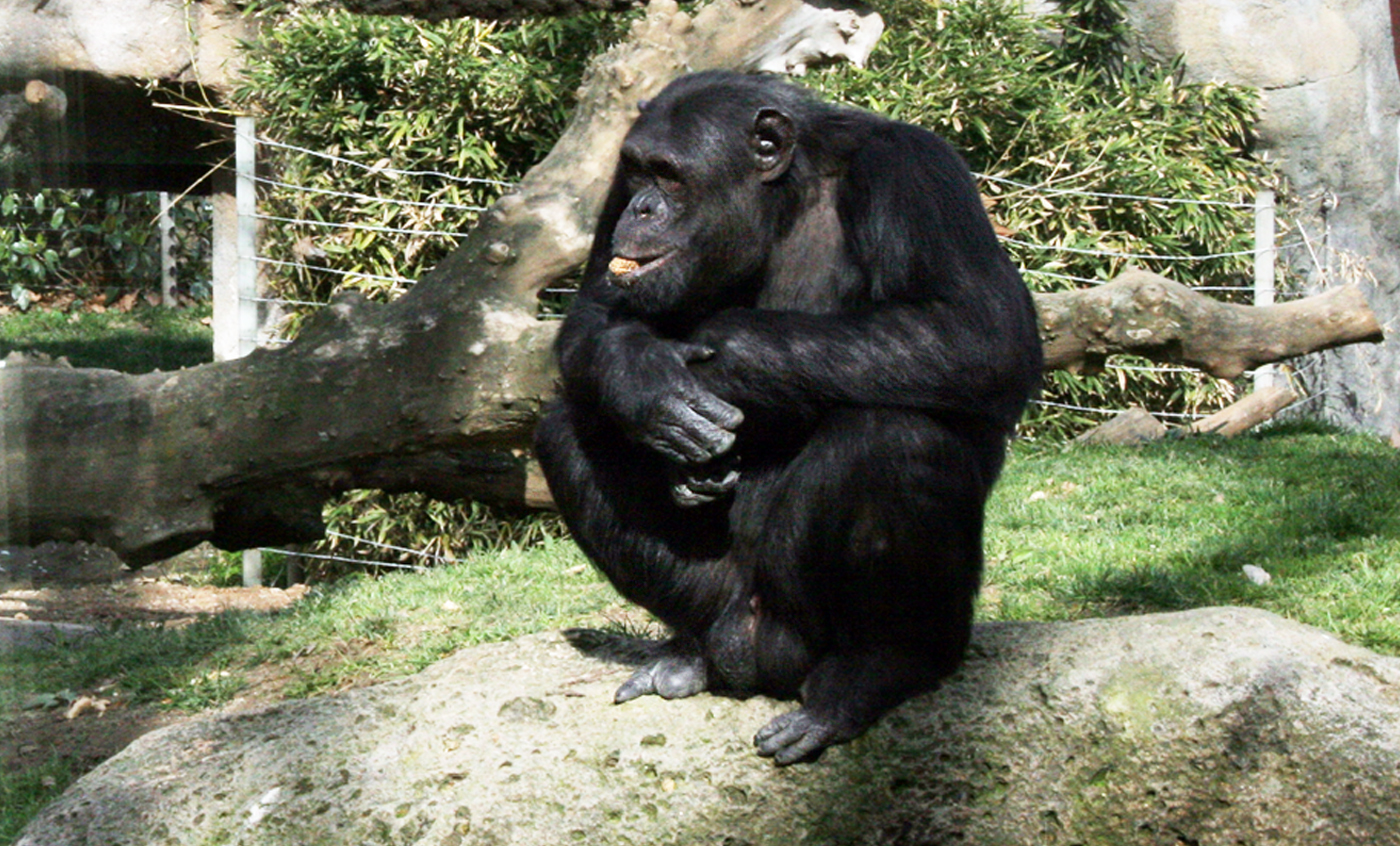